A mycosis is a fungal infection in animals. This term is often associated with an area of infection, such as pulmonary mycosis.


Photo Cred: Wiki contributor Nephron
Posted by Unknown at 10:32 AM No comments:

When man first began to settle out of the hunter-gatherer phase of our evolution we did so in fertile areas. We would perhaps stop where there was a constant source of water, and fair enough weather to allow us a safe and permanent homestead. But, as the world’s population increased those ideal spots became competitive and not everybody had access to things like constant supplies of water to manage crops with. 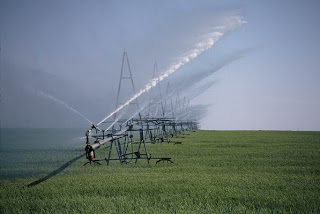 Enter irrigation: the best agricultural idea since somebody first dropped a seed in a hole.
In essence irrigation is simply transporting water from a source to a place where it is needed. Now, this has been going on a long time, evidence suggests the 6th Millennium BCE, and we have developed a whole host of styles. But in the end they all do the same thing; take water from here to there.
Developing irrigation techniques allowed us to thrive in places without an immediate source of water, which opened the world up to us. It also led to a massive population boom (see everybody alive today).

And that is where we run into problems. You see as we grow more populous, we use more water, and leave more waste. So we are left with this transition: More access to water= more crops= more people= more waste= less clean water.

But worry not! People are the ones who ingeniously developed irrigation in the first place, and now all we needed were ways to take the waters we contaminated and use them instead of freshwater. And we have. The use of treated wastewater is one of the most used alternatives to freshwater for irrigation in areas of limited natural resources.

So, we have found ways to deal with dirty water: to take it and try to make it clean and reuse it. But the question is, at what cost? Now for most people here is where we would turn to crop yield, or potential health effects of eating foods grown with wastewater, but we both know that isn’t what I am concerned with.
And a study recently published in PLOS One helps shed light on another impact of irrigating with wastewater: the effect on fungal diversity.

Long-Term Effects of Irrigation with Waste Water on Soil AM Fungi Diversity and Microbial Activities: The Implications for Agro-Ecosystem Resilience

This study from Southeast Spain measured the effects of irrigating an experimental orange grove with treated urban wastewater over the course of 43 years.   The study included isolating and measuring Arbuscular Mycorrhizal Fungi (AMF) diversity in order to better understand techniques for management, sustainability, and productivity of the soils.

They researchers sequenced 145 AMF samples that were grouped into 19 types, all from the Glomeraceae family. They sequenced multiple times to ensure full coverage of fungal diversity in both the wastewater irrigates as well as samples from a control plot of land that has been irrigated with freshwater.
And there results demonstrated a significantly greater diversity of fungal species in the freshwater treated soils. With 15 different AMF types compared to only 10 from the Wastewater irrigated soils.

The team speculated that the addition of nutrients to the soil could be a cause of lower AMF diversity, an observation backed up by evidence that shifts in community composition in nutrient-rich areas leads to a reduced AMF diversity.

In this study they found a significant increase in enzymatic activities of alkaline phosphatase, urease, dehydrogenase, protease and β-glucosidase in the soils treated with wastewater. Previous long term studies measuring irrigation with municipal wastewater concur with this result on the activity of soil enzymes.

The enzymes in the soil, and the introduction of readily available organics in the wastewater allows for a significant increase in microorganism populations. That actually has a beneficial effect on the total microbial biomass in treated soils, but the increased microorganisms don’t help with the Mycorrhizal diversity. It leads to the conclusion that while treatment with wastewater does have several benefits, it selects for the AMF’s that are most able to tolerate higher levels of enzyme activity in the soil.

Using the results from this study could help us define methods to balance the soil microbiota to ensure the best yield per acre of healthy robust crops. See how I went back to crop yields there? And you thought I didn’t care about that.
Awesome Researchers:
del Mar Alguacil, M., Torrecillas, E., Torres, P., García-Orenes, F., & Roldán, A. (2012). Long-Term Effects of Irrigation with Waste Water on Soil AM Fungi Diversity and Microbial Activities: The Implications for Agro-Ecosystem Resilience PLoS ONE, 7 (10) DOI: 10.1371/journal.pone.0047680

Chitin is a long chain polymer of the monosachride N-Acetylglucosamine. While it is important in many biological systems, forming the exoskeleton of arthropods, the radulus of mollusks and the beaks in squids and octopodes, the importance in the fungal world is that of the cell wall.
﻿﻿

Chitin is the chief component of the cell wall in Fungi. It is similiar in structure and purpose to that of cellulose in plant cell walls.

Posted by Unknown at 5:56 AM No comments:

Today I bring you an excerpt from "Mushrooms of America". There are some intersting mushroms listed in this video, but also it has some weird/unneeded parts. It does however mention Lawrence KS, and anything that mentions a town I know is cool by me.
Posted by Unknown at 12:20 PM No comments:

An enclosed ascocarp characterized an apical ostiole and by asci arranged in a basal tuft or hymenium layer.

Photo cred: http://www.geograph.org.uk/photo/1009633 via wikicommons
Posted by Unknown at 8:45 AM No comments:

Yet another Tuesday has come by with me neglecting my duties. I am truly sorry, I have just been lazy recently in keeping my news feeds read. Until I can shift back into writing mode (I think I have a few journal entries lined up) I give you a guide to making spore prints:


And speaking of pores, I don't know if you can top this video of a mushroom releasing spores:

Unless it is maybe these morels:

Posted by Unknown at 4:46 PM No comments:

A single cell and usually ascomycetous fungus that has little or no mycelium, and typically reproduces asexually by budding, and has forms which cause fermentation.
﻿
Photo Cred: Wiki Commons Contributor Bob Blaylock
Posted by Unknown at 6:32 AM No comments:

I have to admit I feel bad about being a little Spore-adic in my postings the past few weeks. But it is a new month and I have a great new idea... Monthly Mushroom!

To be fair this is going to be kind of an off-shoot of Fungal word friday but more species centric. My goal is to pick a new mushroom on the first of every month. I will then run it through a key,this could be an actual Dichotomous key, or maybe just an online visual key (this month), and give you the defining steps along the way.

For our first ever specimen I give you:
Our key today will be that found at www.mushroomexpert.com

1. The mushroom is not growing on another mushroom.
2. There aren't any visible gills.
3. There are also no pores on it.
4.  And it also does not show any teeth. (last weeks Fungal Word Friday)
5. It is clear of the foul-smelling slime that would lead us down the Stinkhorn path.
6. It is shaped like a cup, saucer, goblet, standing rabbit ear, or bowl. Which points us in the  direction of the Bird's Nest Fungi of Cup fungi.
7. It; however, lacks the famous "egg" shaped spore packs that would say Bird's Nest, therefore we will pursue it as a Cup Fungus.

At this point the mushroom expert clarifies that "Cup Fungi" are not an actual scientific term, and that many of those that get put into this group are hard to key out without microscipic traits being analyzed. But we can still give it a go based off of the provided "incomplete" key:

1. The mushroom does not appear like a bird's nest with eggs. (A revisit of our last step.)
2. The cups do not grow partially underground when young. And do not peel back as they mature in star-like rays.
3.  They do are not growing in areas of recent burning, such as as campfire pit, or recently burned forest floor.
4. The margins of the cup lack any kind of eyelash or fringe. Also the underside of the cup appears smooth.
5. The cup has a definite stem at it's base.
6. The cup is growing from a stick, or woody debris. It is goblet shaped; having a black inner lining and a mottle brown and black outside. The cup tapers down to the stem base.
This sounds like our mushroom to me. The winner is... Urnula craterium, The Devil's Urn!